High inflationary pressures, geopolitical shocks, growing internet connectivity, and the prospects of greater financial inclusion will drive the growth of digital currencies – both private and public. Ability of central banks to deliver on their mandate and volatility in cryptocurrency prices over the medium term will be key determinants of public sway in favor of the two competing digital currency archetypes. 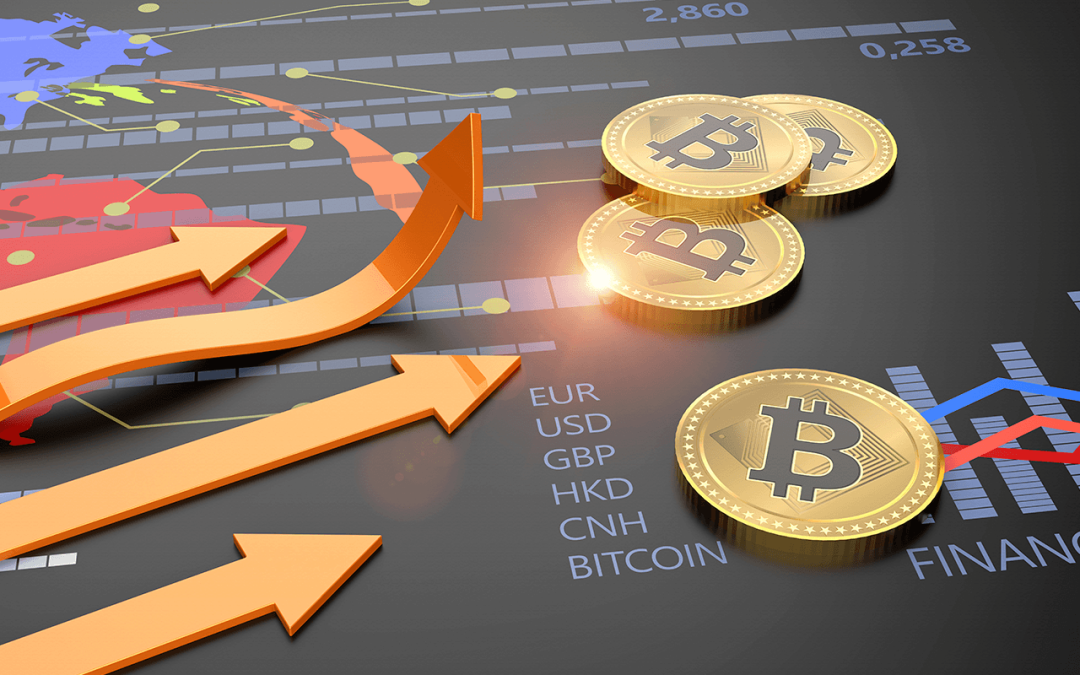 The first decentralized cryptocurrency, Bitcoin, was envisaged as an alternative to the conventional fiat currency, which can render millions financially vulnerable to sudden shifts in national monetary policies. Spearheading decentralization further, Ethereum emerged as a community technology platform in 2015 powering not just its own cryptocurrency, but also a decentralized financial system, and a range of other applications built on smart contracts. Despite the promise of an inclusive platform free of intermediation and fraud-proofing, few economies openly encourage the use of crypto platforms for payments. On the contrary, to counter the financial risks associated with private cryptocurrencies and threats to respective financial sovereignty, 86% of monetary authorities were actively mooting the launch of national digital currencies as of 20211Bank for International Settlement (BIS); “ Ready, steady, go? – Results of the third BIS survey on central bank digital currency”. Together with a rapid surge in private crypto investments in 2021, the idea of digital currencies becoming legal tender over the medium to long-term appears increasingly plausible.

In September 2021, El Salvador became the first country to adopt Bitcoin as legal tender through the launch of its crypto wallet, Chivo. At the other end of the spectrum, China all but banned digital currencies except for the use of its CBDC, i.e. the Digital Yuan in the same month. To examine the implications of widespread usage of private cryptocurrencies and CBDCs, we first distinguish between the two with the help of two case examples, the Digital Yuan in China and Bitcoin in El Salvador. 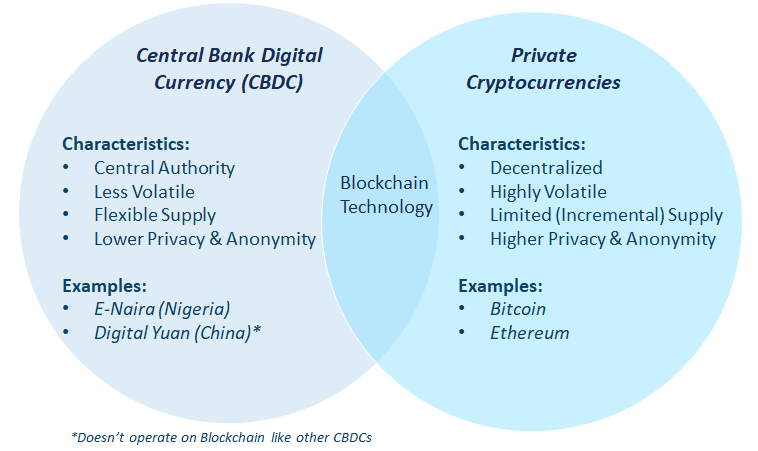 The Digital Yuan is the digital form of the legal tender regulated by China’s central bank, which can be exchanged one-to-one with fiat currency. In comparison, Bitcoin is not tied to a specific currency or an economy, lacking intrinsic value. A heavily regulated Digital Yuan contrasts the idea of decentralized financial systems espoused by private cryptocurrencies such as Bitcoin and Ethereum.

The lack of intrinsic value or backing by a stable entity has rendered Bitcoin and by extension El Salvador’s economy susceptible to high financial volatilities. Sizeable fluctuations in Bitcoin’s value will translate to wide swings in purchasing power, especially if salaries are Bitcoin-denominated. On the other hand, national digital currencies are likely to be much more stable, supported by a range of economic parameters and policy interventions.

Many cryptocurrencies including Bitcoin will either be finite in supply or limit periodic growth in the currency supply. The limited supply has thus resulted in a section of cryptocurrencies emerging as a store of value and a hedge against inflation, akin to gold. On the other hand, the supply of the Digital Yuan would be more flexible in comparison and can lose value over time, in accordance with an expansionary monetary policy.

Although Bitcoin transactions remain transparent and therefore traceable, private cryptocurrencies without a public ledger can offer complete privacy and anonymity to the user, a benefit often associated with cash. However, widespread use of such currencies can increase money laundering, while reducing financial accountability. The Digital Yuan is unlikely to offer such anonymity, especially for larger transactions.

Implications of Digital Currencies as Legal Tender for Different Stakeholders:

Financial Stability, Fraud Risks, and Tax Evasion: Fully anonymous private cryptocurrencies can increase tax evasion and fuel the underground economy and terrorism. If private cryptocurrencies replace fiat as a trusted source for transactions, monetary policy tools can lose effectiveness over time and threaten the financial stability of the country. On the other hand, scaled use of CBDC will have the opposite impact. Notably, CBDC transactions in lieu of cash can improve reported sales and reduce undisclosed income. For cash-intensive economies with high tax evasion and a sizeable share of the informal economy, widespread adoption of national digital currencies can boost government tax revenues.

Unconventional Policy Tools: Pervasive use of CBDCs in lieu of cash may allow for the use of an unconventional monetary policy in the form of negative interest rates. Negative interest rates can weaken the domestic currency thereby making exports cheaper and imports more expensive, contributing to inflation in the economy. Furthermore, CBDC wallets mapped to citizens can facilitate seamless transfer of direct cash subsidies to beneficiaries, minimizing corruption, and increasing the effectiveness of fiscal policy measures.

Figure 2: Implications of Digital Currency Use for Various Stakeholders

Financial Inclusion: Direct cash transfers to digital currency wallets and intermediary-free transactions can support greater financial inclusion and spur rural entrepreneurship. While 46% of El Salvadorians used the crypto wallet in 2021, only 29% had bank accounts as of 20173Forbes; “In El Salvador, More People Have Bitcoin Wallets Than Traditional Bank Accounts”.

Inflation Hedge & Volatility: Persistently high inflationary pressures can make the limited-in-supply private cryptocurrencies an attractive store of value. In emerging markets where high inflation is often a chronic economic condition and internet and smartphone penetration is preceding economic development, the allure of crypto wallets can be particularly high. For instance, while one in three Nigerians have traded cryptocurrencies at least once4Business Insider Africa; “Nigeria is the leading country per capita for Bitcoin and cryptocurrency adoption in the world – report”

, the corresponding numbers for Americans stand at 16% as of 20215Pew Research; “16% of Americans say they have ever invested in, traded or used cryptocurrency”. However, a disproportionately high share of wealth in the form of private currencies can result in high volatility in household consumption and savings. At the same time, while CBDCs will be relatively stable, they can lose value over time due to an increase in money supply under an expansionary monetary policy.

Borderless Transactions & Lower Costs: Employing both public and private digital currencies as a mode of transaction will be cheaper in comparison to traditional alternatives as they do not involve third-party entities. Faster and more secure payments with digital currencies can facilitate penetration into new markets through instant cross-country transactions and offer alternatives to conventional dollar-denominated payments, which can assume importance during geopolitical conflicts.

Higher Cybersecurity, Liquidity & Volatility: Digital currencies operating on blockchain minimize the risk of chargeback fraud, where credit card payments are reversed after a product is delivered, potentially emerging as superior alternatives to current digital payment methods. However, private cryptocurrencies will have to stabilize in value over time in order to emerge as attractive cash equivalents for businesses as they enjoy high liquidity and can offer an effective hedge against currency debasement.

High inflationary pressures, geopolitical shocks, growing internet connectivity, and the prospects of greater financial inclusion will drive the growth of digital currencies – both private and public. Ability of central banks to deliver on their mandate and volatility in cryptocurrency prices over the medium term will be key determinants of public sway in favor of the two competing digital currency archetypes.

Schedule your Growth Pipeline Dialog™ with the Frost & Sullivan team to capture beneficial insights and form a strategy: http://frost.ly/60o