During the last decade, the advent of robotics has phenomenally transformed the industrial sector in terms of manufacturing capability. They are traditionally used to carry out tasks that are complex, repetitive or hazardous to enhance productivity, quality and reduce operational costs for the manufacturers. However, the industrial robotics market is going through a phase of […] 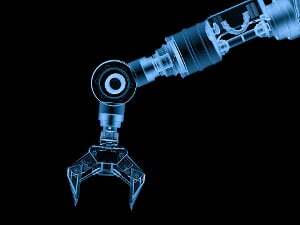 During the last decade, the advent of robotics has phenomenally transformed the industrial sector in terms of manufacturing capability. They are traditionally used to carry out tasks that are complex, repetitive or hazardous to enhance productivity, quality and reduce operational costs for the manufacturers. However, the industrial robotics market is going through a phase of transformation driven by Industrial Internet of Things (IIoT). But the challenges in integrating and programming them restrain their widespread application across verticals.

In the report titled “ Industrial Robotics- Decoding the Robotics Impact on Manufacturing “ Frost and Sullivan analyst Sharmila Annaswamy estimates the global industrial robotics market to double in value to reach $70.26 billion by the year 2023, growing at a compound annual growth rate (CAGR) of 8.1%.

The study answers some of the critical issues prevailing in the industry such as:

Evaluating from a global standpoint, this report estimates the industrial robotics market between 2016 and 2023, with a special focus on potential regional markets like China and Asia-Pacific. This research service aims to understand the key applications of industrial robotics in depth, such as material handling, robotic dispensing and welding, palletizing and assembly operations. It covers end-user segments of industrial robots in various discrete and hybrid industry verticals such as automotive, electrical and electronics, and food and beverages. The research includes an in-depth analysis of the industrial robots offered by major participants in the market. A comparative study of the product is also included to help understand the competitive market offerings. Factors such as human-robot collaboration and robot data analytics using cloud computing for industrial robots are few other topics included in the study.  The study aims to ascertain the importance and role of robots in manufacturing, as well as analyze market forces, trends, challenges, and opportunities in the space.

Automotive and electronics continued to employ the highest number of robots in their shop-floors in 2015. Robotic material handling and welding have emerged as the favorite applications of end-users, occupying 70% of the market share Cloud computing techniques are expected to create fresh opportunities for robots and improve traction in applications such as robotic dispensing and processing. Owing to increasing global demand and hardware layout miniaturization electronics and semiconductor industry is witnessing a rapid deployment of robots in their factories and the trend is expected to continue in the near future.

As product life cycle becomes shorter, manufacturers are keen on just-in-time deliveries which demand improved robotic responsiveness and flexibility. The global sales volume is expected to triple, scaling new heights to reach approximately 743,000 units by 2023.China is expected to be the leading consumer, with an estimated consumption of 110,000 industrial robots during the forecast period, and emerge as a robot manufacturing powerhouse by the year 2020.Though foreign- based manufacturers occupy over two-thirds of the market share, China is witnessing a steady rise in its local participants.

Furthermore, Tier II & Tier III end-users find it difficult to adopt as robots are expensive and users require training to operate and program them. Other key challenges also include limitations on software architecture, exploiting robotic capabilities to widen scope and ensuring safety compliance. Technological advancements and digitization has led to new and diverse applications across various industry sectors. Robots are no longer restricted to their conventional duties such as assembling and handling, new applications are being found out which are not confined by the previous concepts. Combining technologies such as force sensing, tactile sensing, speech recognition, machine vision and advanced mechanics can provide added functionality and value to robotic industry. Also, rapid technology improvement has increased robot flexibility and payloads, thereby reducing the total cost of ownership for the manufacturer.

The impact of digitization and human-robot collaboration on business models in the industrial robotics market space is another important part of the research focus. Expanding the functionality of robots through cloud, employing analytics to monitor on-site robot performance and embedded robot peripherals are expected to develop niche applications of industrial robots in the years ahead

Gravity compensated, lightweight, impact eliminating design of collaborative robots has attracted attention of Tier II and Tier III end users around the globe. The inherent safety features and intelligent perception software has successfully eliminated the gaps in the traditional heavy payload robots and the trend is expected to exponentially rise in the near future. The study comprises of use cases of collaborative robots around the globe and the development of customized industrial robotic applications. The study also looks at major research and development (R&D) investments in collaborative techniques which are expected to enable safe and cage-free operation for large robots.

Industrial Internet of things (IIoT) has set the wheels in motion for the next global revolution. It envisions a connected world characterized by seamless connectivity, real-time monitoring, and smart decision making. An era of convergence is in the making with robots at the center, running factories and making real time decisions with their smart peripherals. The advantages of implementing IIoT in factories are many; asset maintenance, logistics, and predictive maintenance to name a few. By combining Big Data analytics and cloud computing, the robotics industry is expected to become more smart and perceptive to perform collaborative operations with humans during the forecast period. Industrial Internet of Things (IIoT) is likely to widen market opportunities for industrial robots, with new business models aimed at market penetration and faster payback.

The competitive landscape of Industrial robots market is highly fragmented with small players occupying more than 50 % of the market share in 2016. ABB, Fanuc, KUKA, Yaskawa and Kawasaki are the major players in the global market. The industry is trending towards partnerships with major IOT companies such as Cisco, Huawei and Microsoft. This drift is also shifting the industry business models towards plug and play models and Robotics- As-A–Service models.

Finally, under the influence of Industrial IoT megatrend and development of collaborative features, the industrial robotics market is expected to see a tremendous growth in global adoption. While collaborative robots have been acquiring new markets, introducing collaborative features to big robots by using machine learning techniques will reap the best of both worlds and spur the next big robot revolution.