Introduction of Industry 4.0 in the Semiconductor and Sensors Market

Industry 4.0 came into being first in Germany where the government wanted to promote high tech manufacturing. The concept has been compared to the fourth industrial revolution with pioneering entrepreneurs such as Jeff Bezos, Elon Musk etc., all having joined the fray in some way or the other. However, was it not seen to be […] 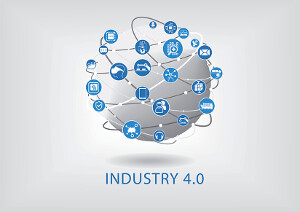 Industry 4.0 came into being first in Germany where the government wanted to promote high tech manufacturing. The concept has been compared to the fourth industrial revolution with pioneering entrepreneurs such as Jeff Bezos, Elon Musk etc., all having joined the fray in some way or the other. However, was it not seen to be coming? In 1965, Gordon Moore of Fairchild Semiconductors in his legendary article “Cramming more components onto integrated circuits” wrote as to how the number of semiconductors would double in about every 18 months. That would translate into a CAGR of about 58% ‼ The only thing is that it has continued for long enough to help Bezos create behemoths such as Amazon. We have undermined the power of computing it seems. “At that rate in about the next 30 years, a $1,000 laptop would be able to do about 10^26 calculations per second. That would be an equivalent of all brains of the entire human race put together.” (Quoted from the book: Abundance, Peter H Diamandis, Steven Kotler)

Earlier, the semiconductor market was a traditional playing ground for companies like Intel, AMD, and Texas Instruments. With the rise of two iconic companies of modern times, Apple and Google, the semiconductor market suddenly opened up to a plethora of new companies such as Samsung, who with its entire range of smartphones and huge manufacturing prowess found it cost effective to manufacture the chips in-house and also supply to other global players. Incidentally, Samsung has supplied chips to Apple for long. The broad trends, however, are pretty evident. Companies have moved away from the traditional desktops and laptop based chips to more mobile friendly ones. Snapdragon with its Arm architecture, with only 9-year experience, has forced Intel to stop its mobile chip manufacturing business which was primarily based on x86 architecture. Moreover, we have seen companies such as Mediatek using some rather outdated and cost effective technologies coming into the fray and harnessing the Chinese manufacturing juggernaut to their advantage and turning up to be quite a formidable player and challenging the status quo. In addition, major mobile companies have ventured backwards and integrated the semiconductors in a hope to reduce costs and build ingenuity. Recent examples include Huwaei and Xiaomi from China.

Amazon had brought one of the more complicated applications called Alexa to the market, called Alexa which included voice recognition, microphones, wireless connectivity, location sensing instruments, access to cloud based computing, and the glue that was a seamless software. Moreover, the Tesla cars have shown similar sort of sensors such as radio sensors, camera, radar and twelve ultrasonic sensors. Hence, semiconductors and sensors would play an increasing role in companies which are moving toward automation.

With rapid technological advancements the need for semiconductor chips and sensors has been escalating every day. The semiconductor and sensor industries are the vast reservoirs of data. These industries thrive on data and the companies today only use a fraction of their information. Industry 4.0 can play a significant role in mining the vast stores of information by analyzing the data and chalk out productive solutions from the insights thus collected. Most of the factories today have not applied the concept of smart manufacturing, but this concept is going to revolutionize the manufacturing process of these industries and bring about operational efficiency, cost optimization and better labor productivity. According to a McKinsey report, factories can realize a productivity gains of 30 to 50 percent for direct labor and gains of 10 to 20 percent for maintenance productivity. Moreover, an average improvement of 10 to 15 percentage points in overall equipment effectiveness, an increase of 1 to 3 percent in yield and a 30 to 50 percent decrease in customer complaints can be achieved by following the lean and Industry 4.0 concept.

Industry 4.0 can lead to a better labor productivity in semiconductor and sensor business  by automating various steps. Moreover, by incorporating sensors which relentlessly monitor data driven out from the various systems, the whole manufacturing process can be monitored and controlled. Models formulated by historical data could determine optimal process parameter settings and those parameters can be adjusted remotely either by operators or automatically in real time.

Industry 4.0 uses advanced analytics to assess machine function in real time with a goal to predict failures before they occur. This kind of preventive maintenance chalked out by machine learning techniques will empower the engineers to create interventions which will keep the plant running and improve the overall productivity. Industry 4.0 provides those analytical tools which result in yield tracking which basically means identifying the major quality rejects, the location in the plant, and the reasons for the same. Industry 4.0 also provides better traceability at the individual –die level throughout production process; this further enhances the productivity of the system by effective time management. The data stored in the semiconductor and sensor factories can be used to formulate multivariate analysers to analyse and provide valuable solutions to various problems occurring the manufacturing plant.

There are other major advantages that a semiconductor and sensor business can avail by industry 4.0. The most important factor that they will gain by adopting this smart manufacturing is differentiation and a robust competitive advantage. Companies adopting these technologies can clearly differentiate themselves from others and that can further help them to enhance their market share. As these industries are intrinsically data driven, an approach of industry 4.0 will act as a major disruptor in their market.