Will the Smartphone Ever be Outdated?

What does the future of personal devices look like? Discover some of the possible future technologies that will aid in thinking about the replacement of physical devices. 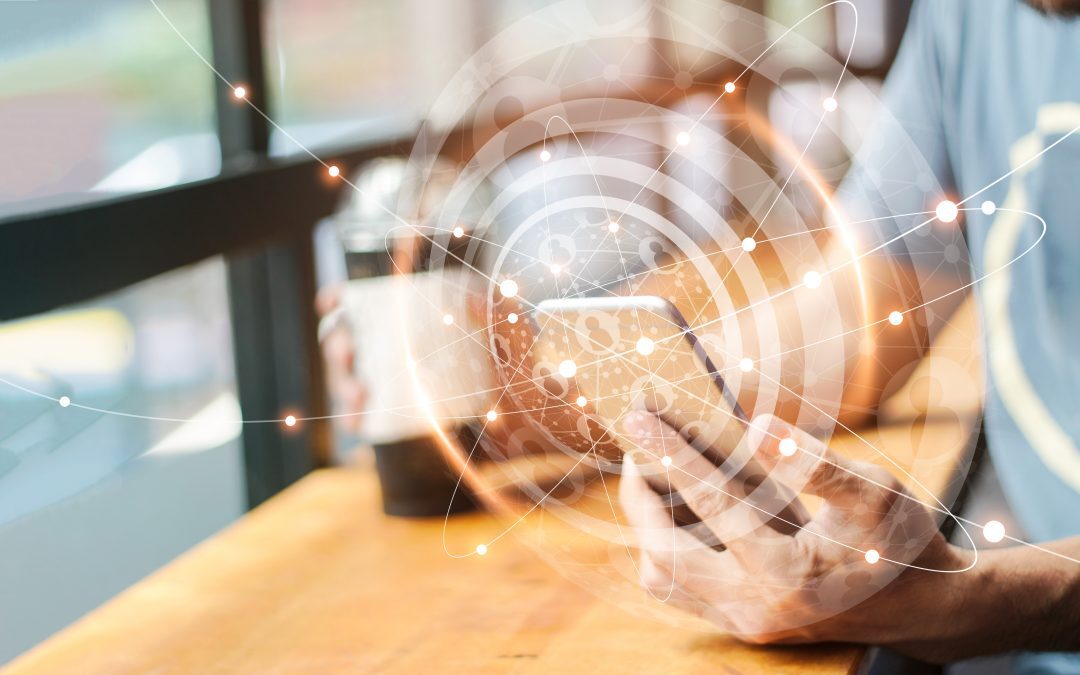 Technology innovation is so precipitous that people have become accustomed to convenience; even nimble tasks like making a call or ordering food through a mobile application are being performed by voice-enabled AI assistants. Future consumers will drift away from using handheld devices, as the inconvenience of holding a physical object in your hand will be considered outdated. Just when you think this scenario is far-fetched, recent innovation initiatives from technology startups in wearable and next-gen connectivity devices will make the future seem closer

The smartphone industry has recently been faced with challenges such as declining sales; Amid the pandemic, according to International Data Corporation, global smartphone shipment is expected to drop 10% year over year in 2020. While smartphone penetration is still on the rise due to the anticipated arrival of 5G, this recent decline is indicative of a slow growth rate due to high market saturation in matured markets.

In an effort to combat the declining sales in mature markets, smartphone companies have been increasing the prices of newer models without providing any real incentive for customers to make the switch. Consumers are not willing to spend thousands of dollars to upgrade their cellphones, with no significant innovation, new functionalities, or a revolutionary change in the technology, itself. Although innovations in smartphone technology have been sluggish lately, years of homogeneity have led the industry to a standstill. Most smartphone companies are trying to shift focus to other revenue streams like Apps, add-on services and advertisements. Smartphone giants like Apple.inc have recently announced its transformation into a leading digital service provider, this shift was consequential of the sluggish sales in Apple.Inc’s three main businesses; smartphones, personal computers and tablets.

The fundamental questions, therefore, are these: ‘Will smartphones ever be outdated?’ and ‘What does the future of personal devices look like?’

When we talk about smartphones being obsolete, we think about some radical change where smartphones suddenly disappear, and a new technology arriving to replace it, which is not untrue. Companies like Microsoft, Apple, and Facebook have all been working on next-generation wearable technologies that will evolve in capabilities to surpass smartphone technology in aspects like functionality, mobility, and processing. As the digital world converges into physical spaces and the human body is augmented with technology, the need for external handheld devices will cease to exist. Recent initiatives from companies like Apple, Tesla, Google, Facebook, etc. in the space of augmented and virtual reality and AI, bequeath light on the possibilities of a world with no handheld devices. For example, ‘Magic Leap’ is working on a headset which is coupled with computing power through a small connected disc but is anticipated to be replaced with a brain computing interface sensor. ‘Immediate’ to ‘reality’ and start a sentence with ‘Advancements in technology such as 5G, artificial intelligence, and brain-machine interfaces are expected to transform experiences in the near future.

Below are some of the possible future technologies that will aid in thinking about the replacement of physical devices:

1.Integrated Bio Chips: The reason for people to opt-out of screens is to have no physical object confining the visual image (a screen over a screen), having no physical object confining the visual image within the boundaries. Apple and Microsoft are already working on using EEG to integrate smartphones with neural sensors technology. This will replace the performance of nimble activities by neural networks.

−‘Neuralink’, founded by Elon Musk, aims at building integrated computer chips inside the brain by a neural lace, These types of cutting edge tech developments might seem obscure but will become a social norm.

Wearable Bracelets: Innovations in foldable displays will give rise to a new range of wearable bracelets that will act as mobile computing devices. Samsung is working on an integrated ecosystem of interconnected devices that will have foldable displays and functionalities like 5G and AI to replace the singular host concept of smartphones. This concept will act as a stepping stone to the future of interconnected smart devices without the need of a host smartphone. The initial idea was the evolution of foldable screen smartphones into bracelet-like devices, which will act as a hybrid of a phone and a wearable, and later evolve and take various new forms and functionality. In theory, these tiny devices will be equipped with computing power and features like holograms and AI smart functions, that will perform more advanced tasks than providing connectivity.

Wearable Glasses: Even though Google’s first-generation smart glasses weren’t as impactful and openly accepted by the consumers, tech giants are still pouring billions in investments for building the next generation of smart glasses equipped with augmented reality, AI, and computing power that will completely replace handheld smartphone devices.

−’North: ‘Focals’ is an AR glass from an Amazon-backed company. It has a digital display. which is controlled by a tiny ring fitted with a joystick and a microphone for voice-controlled commands.

−Magic leap: Prototyped, smart glasses that are now equipped with a small handy computer disk, which will be replaced by BCI sensors, has raised $2 billion in investments.

−Myant: Produces smart garments integrated with electrodes and sensors that will sense the heartbeat and monitor muscle activity.

3.Brain machine interfaces (BMI): A primary function of smartphones is to provide a user-interface – an input device to transfer your requests/thoughts to the processing unit. QWERTY keyboards and touchscreen technology have certainly come a long way in improving the customer experience. However, once fully developed, a Brain-Machine Interface will replace the phones as you would no longer need a device to physically touch the device. Communicating directly with a wearable in your ear or on your wrist will become viable with BMI. As this further develops and intersects with AI approaches in emotion reading, computational neuroscience and biophysics, BMI could become a fundamental tech in future gadgets.

−Neurable: Working on brain-computer interfaces that allow people to control devices and software using only their brain signals. Potentially venturing their applications to gaming and other industries.

On a closing note, we know technology is rapidly advancing day by day; physical assets are increasingly being integrated into the digital world. AI is believed to take over most of the functionalities performed by a smartphone; new innovations in smartphone technologies will evolve and change its functionality and utility, and handheld physical devices will slowly turn obsolete. This transition will happen gradually and in a very phased manner, as smartphones today still produce a huge chunk of revenue shares for most giant tech firms. The concept of smartphones will change and morph into multiple computing devices that will still have the core technology of smartphones, with the additional aspect of changing the idea of connectivity.

A connected ecosystem with no handheld devices:

Figure 1 represents an integrated ecosystem of interconnected devices with embedded functionalities like augmented reality, real-time data collection, and  5G connectivity. This concept of connected devices will replace the singularity of a smartphone. For the next decade, smartphones will act as a central hub before being replaced by wearable screens, omnipresent voice assistants, and diffusive interfaces. Consumers will soon be surrounded by information–untethered from a single screen–and expect even their most mundane objects to do the most extraordinary tasks. 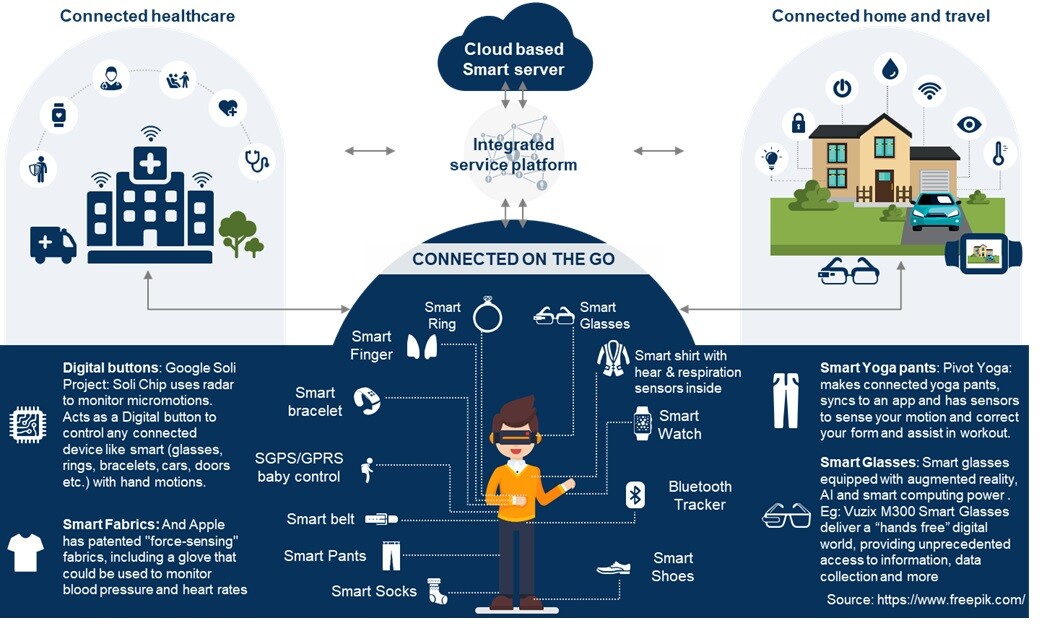 By 2030, we will see a wave of these technologies that will sweep over the existence of handheld smartphone devices, providing better connectivity, mobility, and greater processing powers, coupled with advanced connectivity through next-gen (XG) capabilities, enabling Human Brain-AI computing power and advanced wireless capabilities. This may seem radical, but 15 years ago you would have never imagined being able to talk to a machine to order food and a robot coming to your door to deliver it.