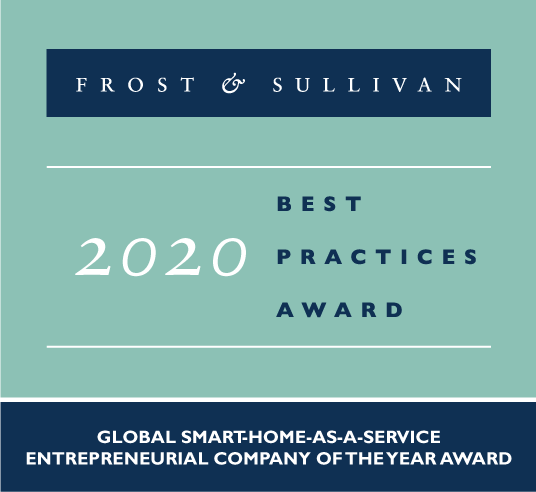 Based on its recent analysis of the global Smart-Home-as-a-Service market, Frost & Sullivan is delighted to recognize Plume® with the 2020 Global Entrepreneurial Company of the Year Award. Its Consumer Experience Management (CEM) Platform reliably, flexibly, and cost-effectively supports Internet Service Providers (ISPs) with intelligent data-driven tools to ensure a positive in-home experience for customers and significantly lowers their operational costs. Through 2020, Plume has scaled rapidly, and is currently activating more than 850,000 households on average per month.

Each year, Frost & Sullivan presents this award to the company that has demonstrated excellence in devising a strong growth strategy and robustly implementing it. The recipient must have shown strength in terms of innovation in products and technologies, leadership in customer value, as well as speed in response to market needs. The award looks at the emerging market players in the industry and recognizes their best practices that are positioned for future growth excellence.

“The speed at which ISPs have adopted Plume’s CEM platform was one of the major factors in making this award,” said Anirudh Bhaskaran, Senior Industry Analyst at Frost & Sullivan. “There are a number of unique elements that differentiate Plume from its competitors and provide ISPs with the tools and insights necessary to derive significant operational benefits––from leveraging customer data to empower service providers at every departmental level, to providing the capability to upgrade and rapidly deploy new services from a common platform. Plume’s AI-driven CEM Platform increases ISPs’ time-to-market advantages through its high-performance cloud-based delivery model, reducing the release time significantly when compared to the traditional network-wide firmware upgrade approach.”

Plume’s CEM Platform supports ISPs worldwide to provide their users with advanced personalization, control, security, and Wi-Fi performance through HomePass®, a new bundle of Smart Home Services. It leverages an open-source framework OpenSync™––an initiative that Plume co-founded and announced together with leading market players in October 2018. OpenSync presents a complete silicon-to-service framework to enable the rapid deployment and management of Smart Home Services from the cloud, ensuring that ISPs can benefit from fast time-to-market, low-cost hardware, and enhanced scalability. In guaranteeing the industry-wide adoption of OpenSync, Plume has simultaneously increased the reach of its Smart Home Services proposition.

“Plume’s full CEM Platform can help ISPs achieve a 30% reduction in customer churn, which translates to an increased overall customer lifetime of 2.9 years and an increase in the customer lifetime value of 70%,” said Anirudh Bhaskaran, Senior Industry Analyst at Frost & Sullivan. “Plume also drives ISPs’ revenue growth by increasing average revenue per user by up to $15 per month for customers with whole-home Wi-Fi offerings, and a $5 per month increase for customers without extenders. Customers deploying Plume’s whole-home Wi-Fi with extenders reduced their OPEX costs by 22.4% in a year.”

For over five decades, Frost & Sullivan has become world-renowned for its role in helping investors, corporate leaders, and governments navigate economic changes and identify disruptive technologies, Mega Trends, new business models, and companies to action, resulting in a continuous flow of growth opportunities to drive future success. Contact us: Start the discussion.

Plume is the creator of the world’s first Consumer Experience Management (CEM) Platform powered by OpenSync™. As the only open and hardware-independent solution, Plume enables the curation and delivery of new Smart Home Services rapidly and at a massive scale. The Plume HomePass® Smart Home Services Suite which includes Plume Adaptive WiFi™, AI Security™, secure Access Controls, advanced Parental Controls, and Plume Motion™ is managed by the Plume Cloud, a data- and AI-driven cloud controller currently running the largest software-defined network in the world. Plume leverages OpenSync, an open-source framework which comes pre-integrated with leading silicon & platform SDKs for coordination by the Plume Cloud.

Plume, HomePass and OpenSync are either trademarks, or registered trademarks of Plume Design, Inc.