3D Printing in the Hydraulics Industry—More Than Just Shaving Weight

By Varun Raman, Research Analyst, Industrial Automation & Process Control 3D printing refers to the process of joining layers of material using computer control, to create a three-dimensional (3D) object. 3D printing is considered to be a subset of both rapid prototyping and additive manufacturing. While all 3 terms have been used interchangeably, the evolution […] 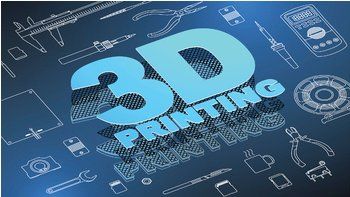 3D printing originally gained popularity in the automotive and aerospace industries, where it was mainly used for rapid prototyping purposes, helping reduce the product development time for manufacturers. Mass adoption of 3D printing as a manufacturing process could be attributed to its development in the healthcare industry. The technology was used to produce customized anatomical structures, prosthetics, and implants, which increased its appeal in a number of industries. In addition to automotive and aerospace, industries such as oil and gas, electronics, and consumer products, over the years, embraced additive manufacturing to produce customized products. However, adoption in the hydraulics industry was limited, as most of the parts were produced in either plastic or ceramic. The development of metal 3D printing processes emerged as a game changer, enabling the technology to penetrate hitherto untouched applications requiring higher load- and pressure-handling capabilities. Products could be 3D printed in materials such as steel, stainless steel, aluminum, iron, cobalt-chrome, titanium, gold, silver, platinum, and inconel.

Challenges for Adoption of 3D Printing Processes in the Hydraulics Industry

While pneumatic systems typically operate at pressures of 80–100 PSI, hydraulic systems operate at pressures between 2000 and 5000 PSI. Specialized hydraulic systems are also capable of operating at much higher pressures—in excess of 10,000 PSI—in some situations. The high operating pressures for hydraulic applications necessitates the ability to withstand high levels of stress on the individual components, alongside resisting mechanical wear. Hydraulic components have power density advantages over competing technologies, as they are a fraction of the size of pneumatic or electric components and can drive large forces and loads by increasing system pressure. However, though the products have seen various improvements in position and velocity control, the production methods of hydraulic components have seen few changes. This is mainly because 3D printing, for all its advantages, remains expensive for mass manufacturing. Hydraulic components such as pumps, motors, valves, and cylinders are predominantly manufactured using steel, aluminum, or bronze, depending on the strength and corrosion resistance required for the application. The high production volumes prevalent in the industry favor the continued adoption of traditional manufacturing techniques due to economy of scale. Additionally, the high system pressures require the valve or the cylinder to withstand the internal stress generated by containing and controlling the fluid under pressure. The tensile strength of the metal used in the valve’s construction is usually indicative of the strength of the valve. Until recently, the materials available for 3D printing were limited to plastics and ceramics.

Traditional 3D-printed products were outside the scope of the hydraulics industry due to the limited range of available materials. However, developments in powder bed processes such as Direct Metal Laser Sintering (DMLS) have enabled manufacturers to rethink the design of hydraulic components.

Though hydraulic valves and other components, such as cylinders, motors, and pumps, are lighter than their electric counterparts, original equipment manufacturers (OEMs) and end users keep at their constant demand for compact components to reduce the system footprint and costs and improve energy efficiency. Traditional manufacturing is a subtractive process, where material is removed from a large piece of metal by Computer Numeric Control (CNC) machining to achieve the desired shape. This process often leaves excess material in place, due to the added costs required for removing it, which typically results in parts weighing more than they need to. 3D printing, in contrast, builds the part layer by layer, resulting in the elimination of excess material, reducing the weight of the produced part. 3D-printed parts, on average, weigh 50–75% less than parts produced using conventional manufacturing techniques.

In the case of hydraulic valves, cartridge valves integrate several valve functions into a single cartridge. Cartridge valves mounted on manifolds reduce space, weight, and cost, when compared to conventional hydraulic circuits. However, many of the passageways in these manifolds need to be positioned such as to prevent cross-drilled channels from intersecting, and require adequate material between channels to provide the required strength. Additionally, auxiliary holes drilled to connect internal passageways have to be plugged to avoid potential leaks. 3D printing, on the other hand, offers new opportunities in the design and manufacture of hydraulic valves, as the parts can be designed to achieve the right balance between performance and production. Internal channels can be optimized for higher flow and lower pressure drops, while the material efficiency remains high, as the part is built layer by layer. The internal flow channels can be placed exactly where they are needed, and configurations that are difficult or impossible to achieve using conventional manufacturing techniques can be specified. The channel design can be optimized to increase fluid flow within a smaller space; auxiliary drilling, as well as hole plugs, can be completely eliminated, reducing the potential for leaks.

Additionally, the speed of the process ensures that multiple prototypes can be produced simultaneously, reducing the product development time. Continued improvements in the 3D printing process, as well as in the materials used to manufacture the parts, can result in 3D-printed parts that are stronger, offering superior performance to conventionally machined parts.

While metal 3D printing in the hydraulics industry is a relatively nascent technology, it offers several advantages over conventional manufacturing techniques. Complex geometries and internal configurations that are not possible with traditional machining processes can be created using 3D printing. Unlike conventional machining, the additive process builds the parts layer by layer, ensuring judicious usage of material. This ensures that the 3D-printed part is light and compact, without compromising on strength or wear resistance. The ability to rapidly produce multiple prototypes also ensures faster product development and reduces the time to market, while the elimination of auxiliary drilling eliminates the potential for fluid leaks.

While the adoption of 3D printing in the hydraulics industry is fraught with challenges, there exists an abundance of untapped potential. The diversity of applications for hydraulic equipment presents a host of opportunities for customization, and 3D printing has the capability to drive a long-term trend of mass customization in the industry.