The Philippines has one of the fastest-growing populations in Asia, increasing about 1.6% per year in the last decade to surpass 100 million in 2015. However, this has not been matched by growth in essential services. Of particular concern is the state of the country’s water supply sector, which has struggled to meet the country’s […] 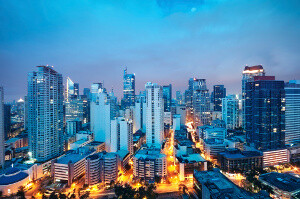 The Philippines has one of the fastest-growing populations in Asia, increasing about 1.6% per year in the last decade to surpass 100 million in 2015. However, this has not been matched by growth in essential services. Of particular concern is the state of the country’s water supply sector, which has struggled to meet the country’s growing needs. The sector has been plagued by poor performance of utilities, low investment, and inadequate data that results in weak planning. This market insight examines the current state of the sector and the challenges facing cost recovery in particular.

According to data from the World Resources Institute, the Philippines had an annual per-capita renewable water resource availability of about 6,100 cubic metres in 2007. This is 6 times the global scarcity threshold and twice the average availability of the rest of Asia. Despite an abundance of water resources, the National Water Resources Board (NWRB), the apex governing body for water resources development in the Philippines, has not been able to provide reliable piped water to a majority of the country’s residents. Water supply in the country is formally administered by water districts and local government units (LGUs) in urban areas, and community-based organizations such as water and sanitation associations and water cooperatives in rural areas. Informal supply mechanisms, which are not regulated by the NWRB, also exist. Informally, water supply is handled by water tankers, entities such as small-scale independent providers (SSIPs) that supply piped water, and through self-provision.

The World Health Organization/UNICEF Joint Monitoring Programme (JMP) for Water Supply and Sanitation put piped water access levels at 39.5% of the population in 2010, while 11% of the population still relied on unimproved sources for drinking water needs. Even among the population with access to piped water, large disparity exists between urban and rural areas, with 56% of urban residents having access compared with a mere 26% of rural residents. Despite the presence of government water authorities and providers, the population’s requirements are met to a large extent by informal providers that hold up to a 40% share in the urban piped water supply.

This stunted growth of the water supply sector results from institutional fragmentation, weak planning, and lack of investment. The country lacks central agencies to coordinate a number of important functions including capacity building among smaller providers, tariff regulation, operational monitoring, and policy enforcement. This fragmentation has led to weak sector planning, with most international development agencies reporting that the country’s water and sanitation master plans are outdated and unable to meet its needs. These regulatory and planning inefficiencies have kept investment and lending low, leading to an overall stagnation in the sector. Coverage gaps have resulted in other issues, such as overexploitation of groundwater resources, water theft, and use of unimproved water sources that expose the population to health risks.

Cost recovery is a core performance metric in business operations and is widely considered to be a key area for reform in water utilities in both developed and developing countries. Successful cost recovery enables sustainable operations and affords a utility the ability to expand and improve services. Cost recovery in the Philippine water sector has been historically low and is one of the contributors to the sector’s stagnation. The primary causes of low cost recovery in the country are inadequate tariffs and absence of tariff reform, inefficient operations, and high non-revenue water (NRW).

Average water utility tariffs in the Philippines are lower than cost-recovery levels. Water supply operators face strong political pressure to keep tariffs low — usually well under cost-recovery levels — and also face public opposition to tariff reform due to the poor quality and reliability of existing water supply. As a result, tariff reform rarely occurs, and only about 10% of water supply operators have profitable operations.

Operators in the sector often lack technical, financial, and management capabilities. Most operators do not follow commercial practices such as performance auditing, financial accounting, or ring-fencing, which results in suboptimal resource management and decision making. For example, labour productivity in the Philippine water sector is very low, with some LGUs having up to 21 employees per 1,000 connections compared with a mere 1.4 employees per 1,000 connections in the privately owned Manila Water system. Additionally, operational inefficiencies are introduced due to the comparatively small scale of operations of water districts, LGUs, and SSIPs. At the end of 2011, more than half of the approximately 500 water districts had less than 3,000 connections, compared with the 99,300 connections that Manila Water was servicing. A 2009 World Bank study confirmed the benefits of economies of scale in water supply, with cost per cubic metre decreasing with increasing utility size due to savings in fixed expenditure, labour costs, and access to low-cost financing.

NRW in the Philippine water sector is among the highest in the world and is a major cause for concern. The piped water system averages an NRW of 47%, compared with 35 to 38% in other developing nations. This percentage is even higher in water districts and LGUs outside Metro Manila and can reach levels close to 60%. High NRW percentages are a result of leaks due to aging infrastructure, rampant theft, presence of older non-metered connections, metering errors, and administrative errors. The losses are purported to be higher since only 15 of the 45 service regions in the Philippines have 100% production and consumption metering, and the available data on NRW is limited and incomplete.

These cost recovery challenges have an even larger impact on the sector considering the state of government investment and lending available to operators. Department of Budget and Management reports show that the most recent infrastructure budget allocated just 3.8% of the total PHP 442 billion government spending towards water supply infrastructure. The operators are not able to receive loans from national and international development banks due to the general perceptions that the sector is not credit-worthy and is an investment risk. The result is that the water supply sector is cash starved and experiences limited growth.

It is clear that the water supply sector in the Philippines has a lot of systemic issues that need to be addressed. The sector needs to learn from the success stories of other operators in Asia. For example, Metro Manila is a special case as it was the first city to receive water supply through government-appointed private contractors. The two private operators, Manila Water and Maynilad, have developed actionable development plans for urban water supply, with both the eastern and western halves of Metro Manila seeing a manifold increase in both coverage and reliable supply. Privatization and public-private partnerships are models with a lot of potential and should be explored as a solution to the current water supply crisis.