Amidst Global Growth Slowdown and Inflationary Pressures, Saudi Arabia Exhibits Economic Resiliency and will be Among the Fastest Growing Economies

Global oil exporting nations, especially GCC and OPEC+ nations, accelerated economic growth amid the elevated oil price levels due to the ongoing Russo-Ukrainian war. Frost & Sullivan’s October forecasts show that the real gross domestic product (GDP) of Saudi Arabia is likely to expand by 7.7% in 2022, positioning the de-facto OPEC+ leader among the fastest-growing economies in the world.

The recent rise in energy prices has bolstered Saudi Arabia’s growth as heightened oil revenues boost domestic purchasing power. Oil revenue growth will enable an expansionary fiscal policy, with necessary central bank rate hikes and price controls helping to mitigate extreme inflationary risks.  The redistribution of state profits earned with oil and gas exports through energy product subsidies is helping to better insulate the economy from inflationary pressures. This sets the kingdom on a different path from other developed nations, for which major commodity basket inflation is driven by higher fuel costs. 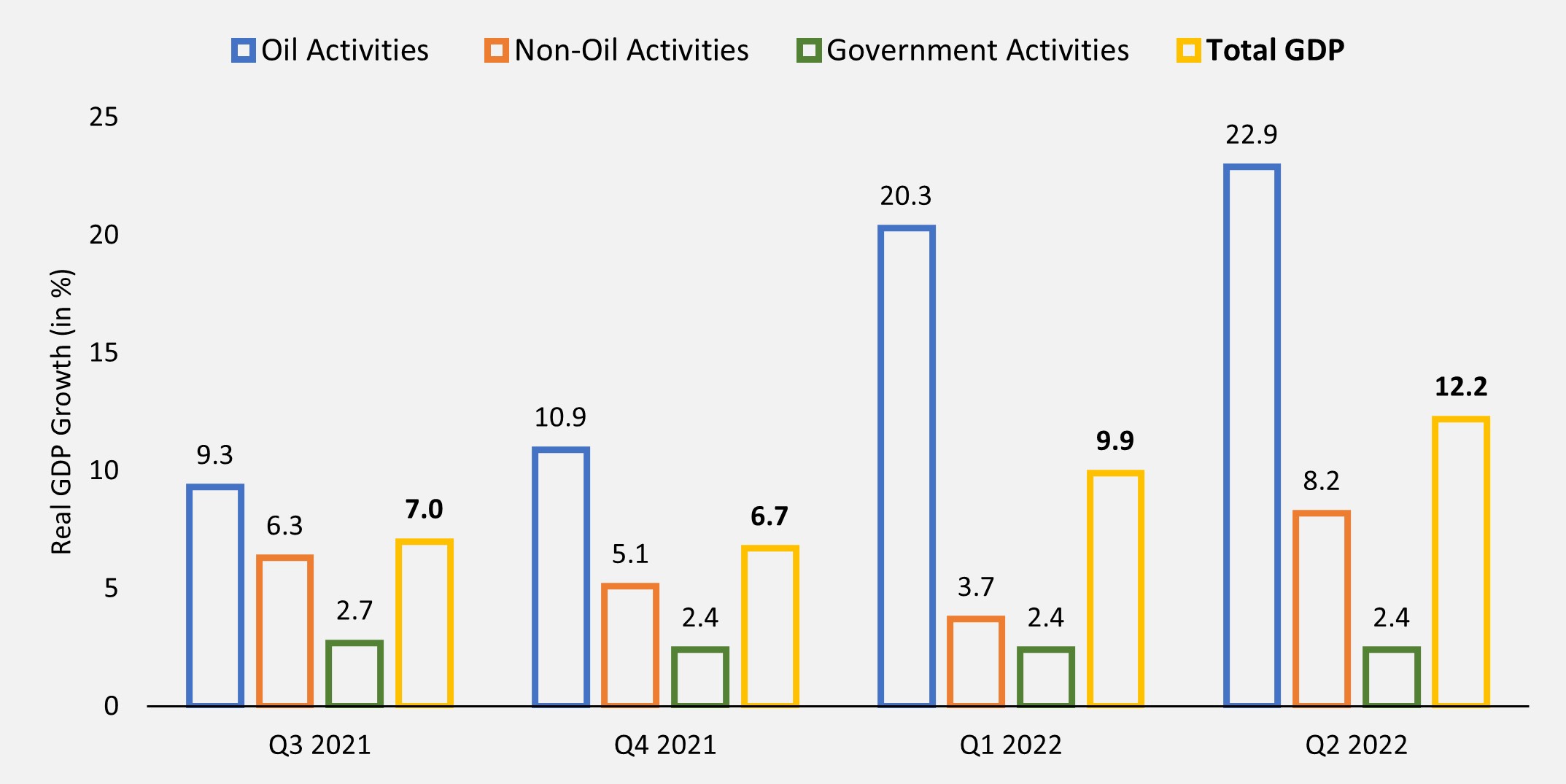 Therefore, a strong oil economy, stable growth in the non-oil sector, planned investments in key sectors for economic diversification, and buoyant consumer and investment sentiment within the nation will drive near- and medium-term growth. A recent budget statement from the Finance Ministry shows government spending is pegged at 1.11 trillion riyals (US$ 296 billion) and revenue at 1.12 trillion riyals (US$ 298 billion). Moreover, the kingdom experienced a 9.9% year-on-year (YoY) GDP growth in Q1, followed by 12.2% growth in Q2 2022. The rise in the share of the oil economy is evident from its ~4% YoY increase, with oil activities’ contribution to GDP rising from 38.7% in Q2 2021 to 42.4% in Q2 2022.

The global economic rebound after the pandemic, the Russo-Ukrainian war, and heightened energy demands from Europe have pushed up oil prices significantly in the past few months. However, rapid monetary tightening and mounting inflationary pressures are now weighing on near-term global growth prospects. In light of the weaker oil demand environment, OPEC+ decided to cut production by 2 million barrels per day, which accounts for ~2% of global supply, starting November 2022.  These production cuts will help support prices above US$100/barrel for Brent crude oil. We expect energy prices to remain elevated at least through Q1 2023 because production cuts and sanctions on Russia will continue to maintain upward pressures.

Elevated oil prices will boost revenue streams and drive Saudi’s economic resilience in contrast to recessionary conditions in some parts of the world. It is important to note that increasing oil revenues help the government diversify its investments in the local economy, with a focus on manufacturing, renewable energy, and information technology sectors, to align with the long-term objectives of Vision 2030. As a result of high real GDP growth, steady labor markets, and a thriving business environment, the kingdom’s investment attractiveness from the viewpoint of value and growth investors should increase.

Looking at the historical trend, we see that the share of non-oil activities in Saudi Arabia’s economy has increased from 40.2% in 2011 to 42.9% in 2021, whereas the share of oil activities has declined from 45.2% to 38.8% over the same period. These trends indicate the kingdom’s diversification objectives through numerous policy efforts under Vision 2030 are being fulfilled. Higher energy prices and the associated boost in revenues will lend further impetus to the country’s diversification agenda.

As a part of Vision 2030, Saudi Arabia has undertaken key structural reforms to cement non-oil activities in overall economic growth. To develop and provide a conducive business environment and become a regional investment hub, over 600 legislative and structural reforms have been introduced by the state, which will help attract foreign investments. Domestic markets also receive policy support through initiatives such as the Made in Saudi Program and the Regional Headquarters Policy. These inward-looking programs will help develop domestic industries, generate employment, drive consumer spending, and support entrepreneurial ecosystems. Building regional headquarters will bring in investments to secure public sector contracts and help drive sales of locally produced goods and services. Hence, consistent policy support, a resilient domestic economy, steady investments in renewable energy, and elevated energy prices will support the transition beyond oil.

Member nations of the Gulf Cooperation Council (GCC)—Bahrain, Kuwait, Oman, Qatar, Saudi Arabia, and the United Arab Emirates—are likely to experience a strong post-pandemic rebound this year, benefitting not only from the current energy markets but also from Saudi Arabia’s fast growth. As the strongest economy in the group, the kingdom is a key trading partner and investor for the remaining GCC nations. Member nations’ long-term policy plans to reduce dependency on hydrocarbon exports and current profits from the buoyant oil economy will encourage regional investments in the manufacturing, supply chain, green energy, urban infrastructure, and trade and tourism sectors in the medium term.

The kingdom’s business relationship is cemented with strong to-and-fro interlinkages with other GCC member nations. Strong growth in Saudi Arabia, complemented by the flexible movement of GCC citizens and low-tariff barriers, will help support the trade and tourism sectors of these Middle Eastern countries. Saudi Arabia also has particularly strong relationships with Bahrain and the United Arab Emirates in terms of trade, flow of labor, and investments from Saudi into their local industries. Overall growth in the kingdom’s local industries is bound to inject positive spill-over effects in Saudi Arabia’s closest trading partners.

Against the backdrop of the Russo-Ukrainian war, high inflationary pressures, supply chain disruptions and other emerging risks, the global growth outlook remains subdued in the short term. Frost & Sullivan’s end-of-August forecasts show the global GDP growing by 2.8% in 2022. As price pressures and rising borrowing costs weigh on purchasing power and investments across the globe, economic growth is likely to slow down in major economies. However, the heightened commodity prices, including food and fuel, bolster the economic growth of commodity-exporting nations. Similarly, all oil-exporting nations at large are forecast to expand in the near term as oil revenues boost government and domestic income levels. Considering these upsides, Saudi Arabia, as per Frost & Sullivan, is forecasted to grow by 7.7% in 2022.

The kingdom’s heavy reliance on oil exports makes its performance vulnerable to oil price volatility. Economic diversification and structural transformation must pick up the pace, especially when Saudi Arabia is benefitting from higher oil revenues. Vision 2030’s diversification beyond oil, targets of fulfilling 50% of its energy needs through renewables by the end of this decade, and policy to build local industries from the ground up will help the Middle Eastern behemoth pave its sustainable development trajectory in the 21st century and establish growth-driving sectors that are resilient in the face of future commodity busts.