Living on the Edge: AI/ML for Maintaining Relevancy for UAS Platforms 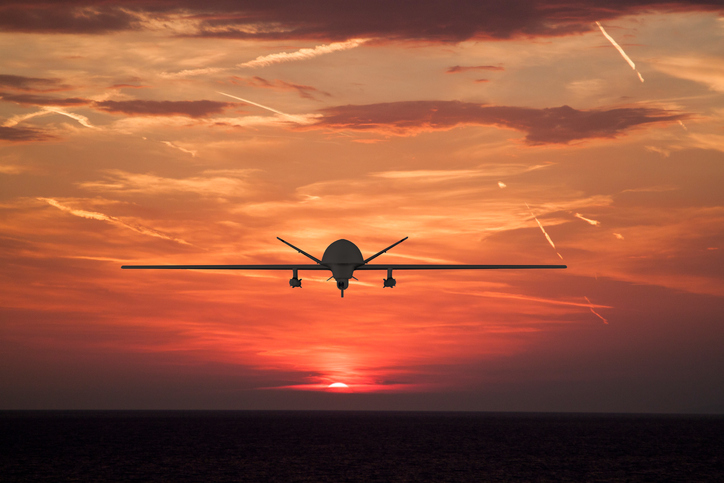 In Leonardo DiCaprio’s 2008 Body of Lies, a scene featuring him being taken by the bad guys demonstrates the simplicity of countering standard real-time video (CCD/FLIR) ISR. By raising a dust cloud, the UAV’s EOIR sensor could not pick up into which car the good guy was being loaded. The scene describes the current state of the EOIR payload: once the only intelligence-gathering sensor, in the current operational climate, its benefits (on its own) are declining rapidly.

While UAS technology has evolved, so did the adversary’s tactics. Employing extremely low-tech countermeasures is doing the trick, such as conducting business not directly under the bright sky—utilizing forest canopies, bridges, shade constructions, and indoor and underground facilities. Outside, they blend with the general civilian population by way of behavior and dress.

Identifying and maintaining a grasp on targets via traditional EO/IR sensors only gets tougher as the simplest targets are now time-sensitive while conducting their updated routines. Thus, when employing mission sensors, what used to be an advantage is now mandatory: unmanned systems without dual and even triple mission payload capabilities, enabling a parallel gathering of information in real time to compensate for one another, might be rendered almost useless in the modern battlefield with emphasis on the non-symmetric one as well as highly contested environments. A mission suite comprising of a mix of EOIR, SAR/MPR, COMINT/ELINT/SIGINT, WAMI/WAPS and others is the new norm. But is that enough?

While mission sensor technology is constantly evolving with great new features, the ability to gather an additional layer of previously non-available intelligence has not progressed. Losing sight of a target due to obstructions for just a few moments with similar targets around can mean the difference between mission success and failure. The industry has hit its glass ceiling for the standard ISR mission sets.

Companies and manufacturers shifting their focus to the next phase of ISR capabilities will flourish. Companies and manufacturers that will continue to solely focus on the UAV platform will be deemed irrelevant without obtaining or partnering with current mission-capable sensor developers. While the platforms are critical for enabling the employment of their payloads in the most efficient manner, we must remember that the payloads are at the front. The objective is to gather the intel and not turn “fuel into noise.” Mission first.

The industry previously had the 4K/HD leap and the dual payload capacity capability, for example; the natural and much required next phase of the UAS evolution is AI/ML embedded capabilities on the edge.

Yes, the industry is full of “slogans and shout-outs,” and apparently, every company “talks the talk” and “understands the requirement.” But “understanding the requirement” and applying a basic target recognition feature are not enough.

The real requirement, the real change, will come when we give the warfighter and intelligence personnel basic capabilities not available today, thus adapting to modern operational needs: a clear view of a license plate from standard ISR operation altitudes, differentiating figures “simply” by face recognition from standard ISR operating altitudes, maintaining a hold on a target even after losing direct sight for a certain time, and much more.

The need for an additional real-time layer of information is essential for the current operational climate as non-symmetric theaters become tougher with time-sensitive targets while near-peer confrontation focuses on survivability and the need for fast target detection recognition and identification.

The modern UAS ecosystem is not just about the platform—how far, high, and fast it can fly and the payload weight it can carry. The modern UAS ecosystem includes the platform but is also about data connectivity, datalink assurance, a logistic footprint for multi-domain operations, interoperability between different systems, and, most importantly, the mission gathering capabilities at the core.

Technology is a central catalyzer of UAVs flourishing within a global military posture, particularly in the U.S. As such, the rapid development of AI capabilities on the edge will push UAVs toward becoming even more effective operationally. Technological advancements bring new multi-domain functionalities and capabilities to UAVs, increasing relevancy to the battlefield. AI on the edge is a cost-effective alternative to expensive manned platforms in an ever-increasing number of mission sets. In a sense, it is a pivotal historic crossroad as emerging technologies set the pace for UAVs to mitigate almost all aerial operational requirements among U.S. Armed Forces and NATO members.

Contact the Frost & Sullivan Aerospace & Defense team for a more detailed overview of the growing UAS edge market in the U.S., Europe and the Middle East.